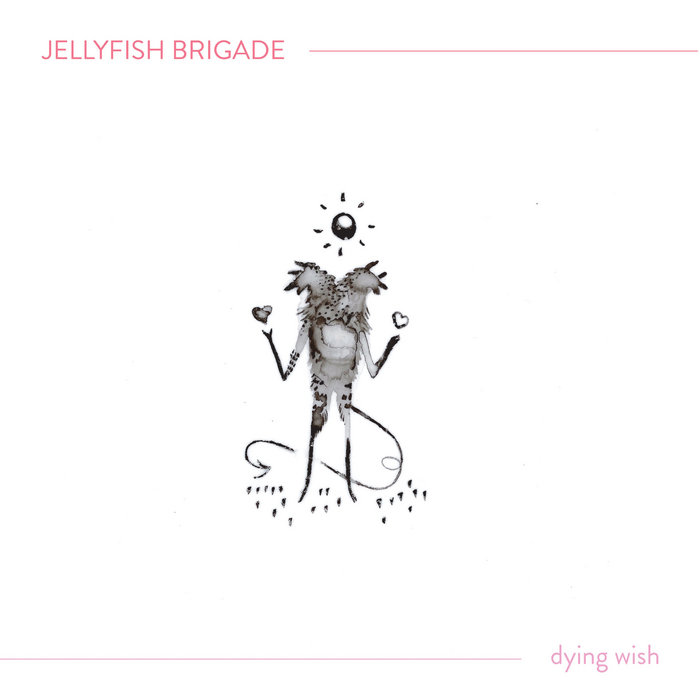 Between 2011 and 2014, we released Gills and a Helmet, Sunflowers, Art of Being Pulled Apart, and Diving Lessons. We made songs about rivers, mountains, insecurities, finding one’s self, and gaining and losing loved ones.

And then we stopped.

And I started teaching and got married and bought a house, spending my hours in school and in the garden.

And Jeff got married and moved to the mountain, living in a bus and exploring white water rapids and cliff faces before copping his own crib. We’ve grown up a lot, but we’re still very much the same folks.

This past December, after I showed him that people were still listening to us 6 years after we’d last released anything, I got a call from Jeff saying, “I’m gonna buy a new computer.”
Now, here we are. Ready to release new songs, and the first of those songs is a track titled Dying WIsh.

Dying Wish is about a lot of different things - the mice I could hear crawling around in my attic at night, my fear of an earthquake hitting while I’m stuck in traffic jams underneath bridges, the fact that I still sometimes refer to myself as “ya boy” even though I’m 36 years old - but mostly it’s about duality. The notion that we’ve learned a lot but still have a long way to go, the fact that we can feel like we’re simultaneously really great at something while also feeling like we suck at it, the idea of planning for forever while living like we’ve got limited breaths left.

I’ve been a middle school teacher for a decade now, and the one thing I’ve learned from this position which has greatly affected my life is that one can be cool and uncool at the same time. I may be “cool” for a mid-30’s Language Arts teacher with a wet jumper, but I’m not the slightest bit “cool” in the way it’s defined financially, pop culturally, musically, social media-ly, etc. Along those same lines, I’m incredibly important to my community and the people in my life, but on an expansive timeline, my name and actions will be lost to the dirt.

Now that can be a scary notion for some folks, and at one point in my life the thought of being forgotten paralyzed me with anxiety. But these days, I exist within the sweet spot of knowing that ya boy is the coolest food growing, music making, hoops playing, wife loving, adventure seeking, chicken raising, footage editing, cross country coaching teacher on the planet, while also understanding that at the end of the day, in the grand scheme, I ain’t the least bit important.

And it’s good to feel that way because recognizing you ain’t nothing special allows you the space to continue to grow, accept criticism, and find your ever changing self. It allows us to shoot for the stars, end up on Mars, and front like that was the plan the whole time.

Thanks for rocking with us on this.
More to come soon.

Damn near 40 worried bout how the drip look
Fresh kicks and a hoodie that fits good
I’m pin cush comfy, ain’t trippin like sick Wooks
But I get shook, overload of sensory input
Resolve like I spent a month hugging driftwood
My getaway’s like I’m hunting for bigfoot
Holding on to hope with the grip of a pit bull
I’m just tryna eat the worm without lipping the fish hook
Push myself like it’s leap on three
A sacrifice to the powers beyond me
Aura leaking colors of them neon leaves
Crooning like a oscine but I sing off key
Be the worker bee’s knees of my own tiny demo
Yet I’m more dirty rock than a fine shiny metal
Hello, worst at it, but I’m better than most
Hello, critic in my head won’t let me alone (let’s go)
Up, up, down, down like a game code
Stay gold, Pony, like we sliding on rainbows
Shaking up the same ol’ like a magic 8 ball
Tell me no lies don’t sell me no snake oil (yugh)
Luda be the “here it comes” hollerer
Whole fam do it together as one polymer
dun dada, put me to use - stumped conifers
So fly that I get caught in the spun gossamer

Prep like I’m blessed with Elven blood
But I live like a dying wish
Shoot for the stars, touchdown on Mars
But I front like I can’t miss
Move like I’m teamed with the higher beings
But I speak with a primates wit
Baby, baby I’m a cool mother fucker
At the same time I ain’t shit

I get deep with the mole folk, high with the space peeps
The sine wave peak-to-peak ride is amazing
I’d rather not float at all than die in the mainstream
I’m swimming on the side towards an island of daisies
Cooler than three scoops with a side of some brain freeze
Cooler than the veins in the residers of Hades
Got mice in the attic and they driving me crazy
And ghosts in the wires, each appliance is angry
Push that pound sign, sucking the down time
My cloud nine nogging hanging up in the alpine
If you a mitigator tryna muffle the outcry
Kick stones homey get the fuck from around mine
Ya boy still refer to himself as ya boy
It helps minimize the expanding void
Alabaster noise played to the beat of the faucet leak
Vibe to it but I can’t seem to fall asleep
In the moment it’s blood curdled delirium
Afterwards it’s a fun learning experience
Long sigh, giggle of the gulps in bulk
Still alive, steady vibing off the pulsing volts (woah)
I’m woke but don’t know, I’m dope and so-so
The clock’s a fan blade, a slowing Chronos
My logo’s a jellyfish with tentacles reaching
To the heavens and the hands of whoever should need me

Press that heart one time
Let me know you really mean it
Gets real dark offline
But the stars light the zenith
Everything start off fine
Til your strength becomes your weakness
Yeah, it gets hard all right
But that’s just part of the sequence
Damn near 40, my retirement plan
Is cooking rats on a spit amidst the fiery lands
They say the big one coming, it’ll buckle the bricks
So I never stop in traffic jams under the bridge
I’ll be DIY until I DIE
Except for the people rocking beside me
I said my three eyes see, I ain’t a VIP
Just a cool cat landing on my feline feet

Mixed by The Great Mundane
Mastered by Shawn Hatfield for AudibleOddities

Art by Rialenga
Layout and Design by Kate Greve